The Deep Blue Beyond, Part 2

Exmouth, a little coastal town in the remote Pilbara region of Western Australia, is steeped in history, mystery and enough hair-brained intrigue to keep a conspiracy theorist busy for weeks. I’m into evidence-based knowledge myself, but when we first arrived in Australia five years ago, I read a little bit about the quiet role the town has played in western defence and security in the Indian and Pacific Oceans. My interest had been piqued at the time, but I soon became frustrated by a lack of reliable, publicly available information, and slightly bemused by far-fetched speculation over various mysterious weapons projects that might or might not exist in Australia’s wild west. 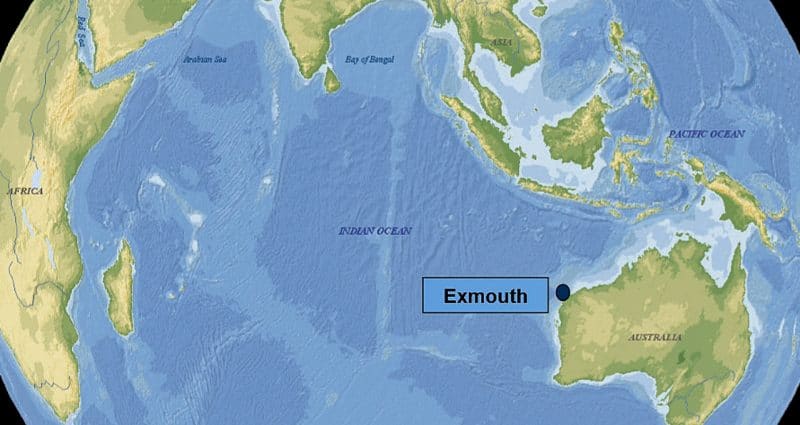 Exmouth is the most remote town we’ve visited on our Aussie adventure (and we’ve been to a lot of remote places!)

Over the next few years, we lived in Canberra and Sydney, absorbing a lot of information about Australia’s strategic culture, before heading off on a year-long travel and photography adventure. Fast forward ten months and lots of blog posts about life on the road, and we arrived in a hot, arid town on Western Australia’s outback coast, intent on visiting its world-famous attraction: the spectacular Ningaloo Reef. Initially, as we drove along the town’s tidy streets, it seemed strangely familiar to me, and not just because there’s a place with the same name in the UK.

The next day, I was sitting on a bus, on my way to swim with whale sharks (our main reason for visiting Exmouth) when another passenger – a local, as it turned out – started chatting to me about a striking area of towering aerials we were passing. “It’s all very hush hush,” she said, leaning over me. “But here we are in little Exmouth, and all around us there’s this secret high tech surveillance equipment. It’s like a schizophrenic town – the tourism town, which is all fun and frolics, and the defence intelligence town, which is basically ‘don’t ask, don’t tell’.” 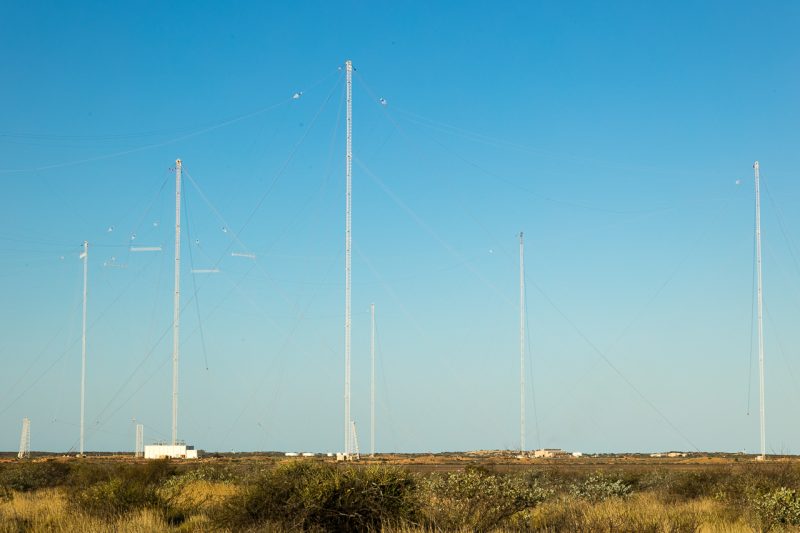 The aerials, part of Exmouth’s Harold E Holt facility (named after the Australian Prime Minister, who disappeared while swimming in 1967)

That’s when the penny dropped. Loudly. Ah-ha, I said. That’s why the name is so familiar! We’d arrived in the wild west town I’d read about all those years before – a place that has a nearly unrivalled role in the Australia-US defence relationship.

It may be one of the remotest towns in Australia, but Exmouth is one of the most strategically located. It’s right on the southwest edge of the Indian Ocean, close enough to the South China Sea to monitor and potentially respond to developments there, and far enough away from Australia’s most treasured ally, the United States, to plug a gap in the Cold War strategic architecture, which unfortunately remains relevant to this day. 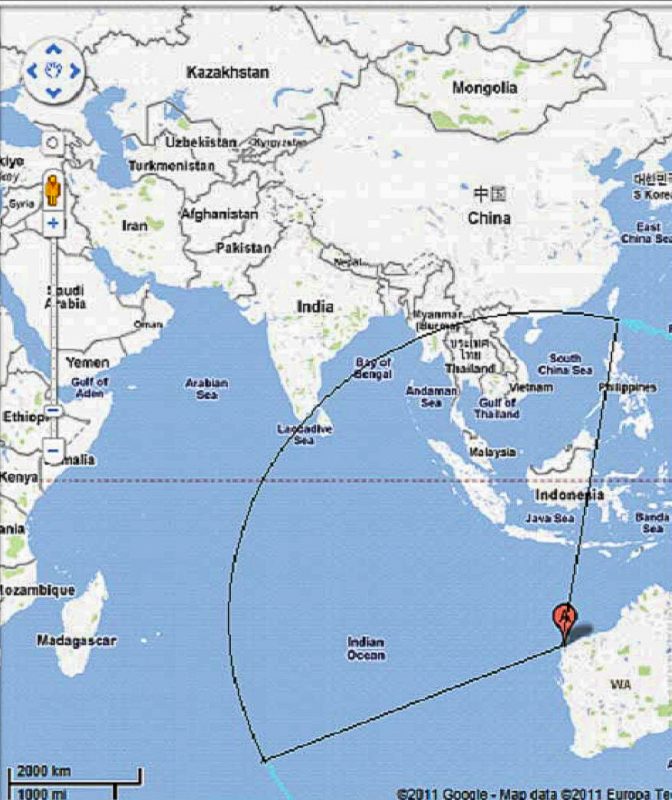 It’s impossible to hide all the militarily significant equipment in and around Exmouth, and, in fact, up at the town’s picturesque lighthouse, there’s some basic info on display for anyone who’s interested in finding out about the town’s colourful past (although it’s noticeably silent about its present). 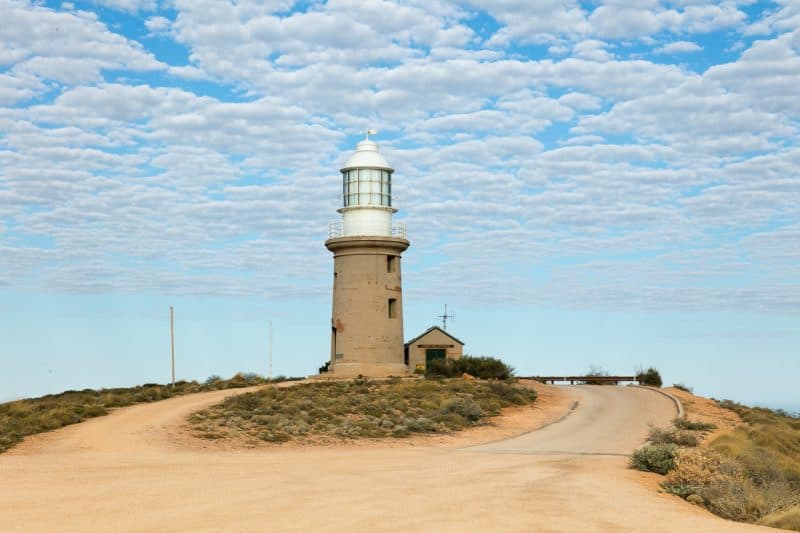 The lighthouse, where you can find a brief introduction to Exmouth’s fascinating history

For me, the most intriguing period of Exmouth’s history dates back to the Cuban Missile Crisis of October 1962. One of the lighthouse information boards introduces the issue with a dramatic opening question, asking: “Do you remember when the world watched in trepidation as the United States and the former USSR faced off like gladiators, each armed with a devastating arsenal of nuclear weapons?” Well, oddly enough, it turns out that Exmouth played a key role in dealing with the fallout from those terrifying days, helping plug a gap that the crisis exposed: the inability of the US navy to communicate with its nuclear-armed submarines in key strategic arenas.

I stood with my back to the lighthouse, reading the history boards and looking out over the thirteen aerials that I’d seen jutting up into Exmouth’s blue sky the previous day. I now understood that those aerials were part of US efforts to overcome a major strategic weakness – one that I hadn’t known about, despite having given lectures on the evolution of sea-based nuclear deterrence, and despite having studied the Cuban Missile Crisis. 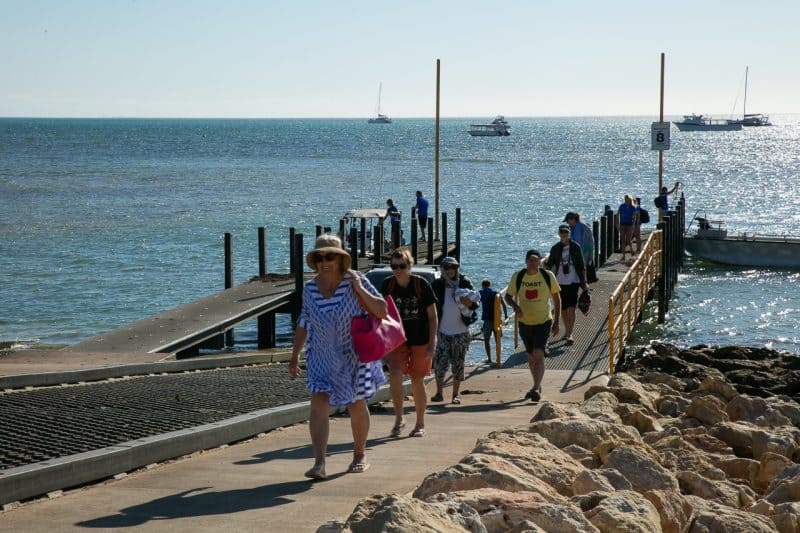 Many of the boats that take visitors out to the Ningaloo Reef leave from this jetty, which is near the 13 towers

The story is quite compelling. In 1963, when memories of the world’s first major nuclear standoff were still extremely raw, a group of American engineers were instructed to “go to the world’s remotest capital. Then go another 700 miles or so north, and build a technological and engineering marvel. Oh, and by the way, you will need to build a town…roads, a power station and a pier. And did I mention the heat and the cyclones?” (Brian Humphrey, Calls to the Deep). 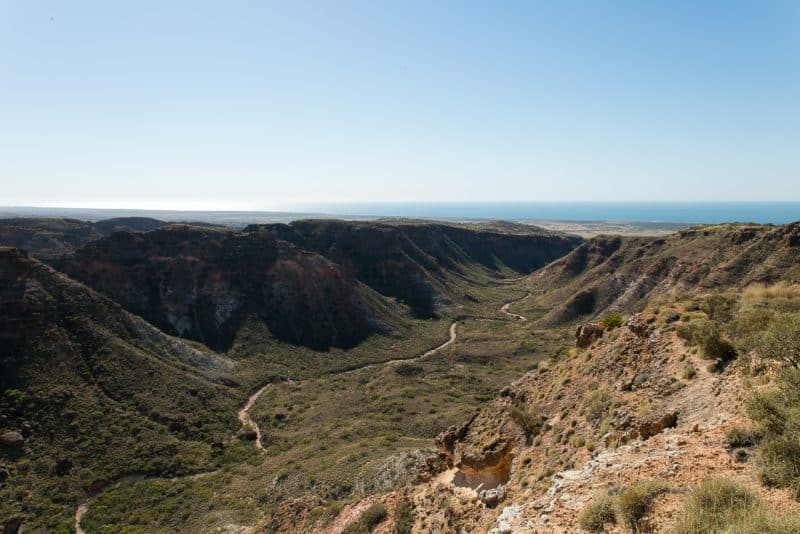 The American engineers had been tasked with building Exmouth, in a place described by nineteenth century French seafarer Jacques Arago as a “desert of cold, heart-freezing solitude,” and “a sad and silent spectacle of nerveless, lifeless nature.” Even now, with air conditioning, running water, and other supplies readily available, it’s easy to imagine the sense of disbelief the Americans must have felt when they arrived in this remote, hot and dusty corner of the world. 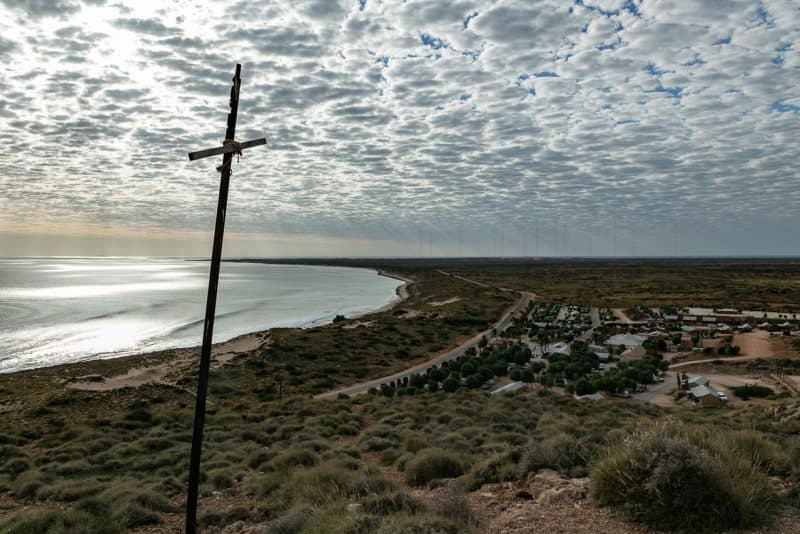 Looking down over the lighthouse camping ground, with the aerials in the distance

They succeeded in their task, however, and for more than 20 years, very low frequency signals transmitted by Exmouth’s naval communication system supported US strategic nuclear submarines in the Indian and Pacific Oceans, until they were retired and replaced in the 1980s.

But that’s not the end of the story. Other US facilities followed, networking Exmouth and other Western Australian towns into a complex global information grid, including through the installation of sophisticated space surveillance equipment. The latter is the focus of some of the most outlandish conspiracy theories that circulate around Exmouth, including assertions that Exmouth’s space radar system might have unintentionally interfered with civilian aircraft passing over the Indian Ocean, and that scientists at another Exmouth base are developing “weather weapons” as part of a wider US-led programme. 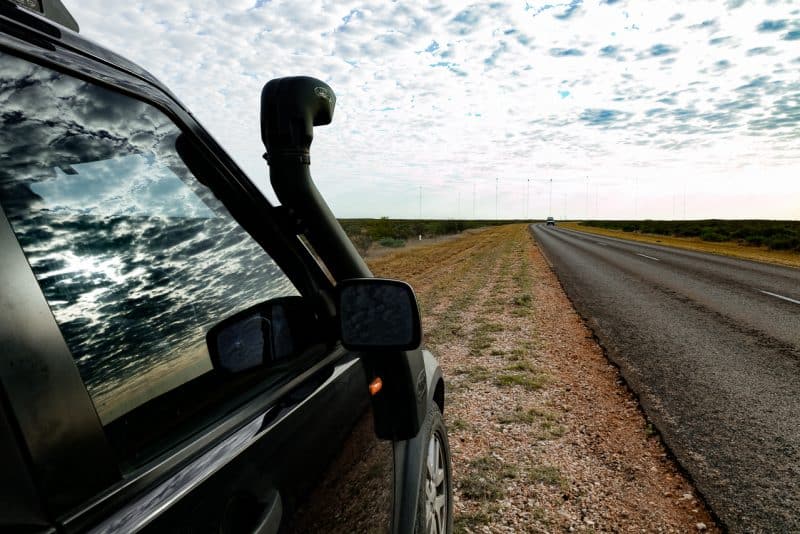 Heading back to the Harold E Holt facility, the morning I drove up to the lighthouse

Conspiracy theories aside, Exmouth’s role in the US-Australia alliance is expanding again, after a post-Cold War period of relative stasis. The renewed activity is symptomatic of rising global tensions, including in the South China Sea. Investment is pouring into the town, with new housing and community projects mushrooming, and new military facilities clearly under development.

It’s a strange and colourful history for such a small, isolated, and unassuming town, and even more remarkable given Exmouth’s recent exposure as a world class diving destination, where tourists now venture into previously secret territory. Exmouth is also interesting because it’s such a striking example of Australian strategic culture, built as a result of past and present US-led military activities, some of which the host government had little control over. Most Australians are probably unaware of this history, and many might not approve if they knew the details. It’s also quite amusing to consider that the whale shark divers of the world, and our dog Bailey, are more familiar with Exmouth’s military infrastructure than some Australian officials. 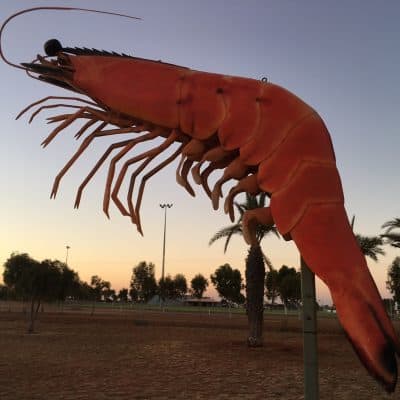 Exmouth- also famous for its delicious seafood, and this giant prawn 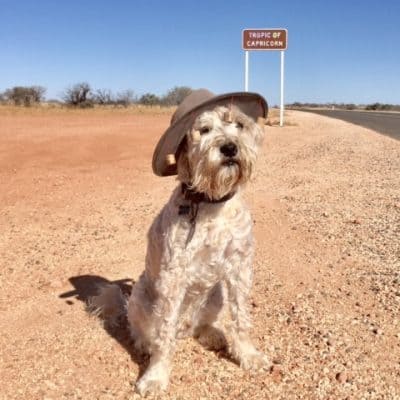 Bailey, our travelling dog, sitting beside the Tropic of Capricorn sign, just outside Exmouth